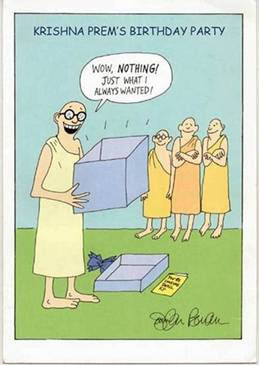 February 14th is Valentine’s Day, celebrated all over the world as a day for lovers. On February 14th, 1973 I met the love of my life; his name at the time was Bhagwan Shree Rajneesh, known today to his beloveds worldwide as Osho. My body age at the time was 29 years old, and I have now attained the ripe age of 38 as an Osho sannyasin; you do the math! I certainly can’t imagine how many more blog entries this bloke has left in his being but for now, I feel like reminiscing….

Imagine if you will that I am 29, miserable and angry, sitting in front of a beaming Osho for the very first time...I so wanted to crawl under my orange pyjamas (standard outfit before the maroon robe of now became the fashion), and disappear to get away from his attention. In this very moment, it was just him and me in his one-room home in the desert in the middle of Nowhere, India. Back in ’73 Osho’s official residence was an apartment in the Woodlands Building in Bombay. He was already bigger than his apartment and this desert was to be the beginning of his first ashram. As I jumped onto the train, Osho got there first in his pre-Rolls Royce, pre-historic Chevrolet. I don’t know the exact location because I arrived by train from Bombay and thus saw nothing but Indians by the dozen on all four sides of my immediate circumference…yes I can remember the smell and my desire to die immediately and nothing else. Having miraculously survived a 3rd-class un-air-conditioned Indian train journey, I nearly lost my mind when I came to know that the only available transportation between this rural train stop and Osho was a bullock cart…no shit, except, from the bullock which upon first breath hid the smells from the train with welcomed relief. Intuitively I remembered to breathe out.

The first thing Osho said to me was that the revolution is inside of myself. I immediately exploded into the unknown because I had thought my life was secret and he read me like an open book. In the same year, 1973, Roberta Flack sang the song, ‘Killing me softly with his song, telling my whole life with his words.’

The second thing he said to me was, “Your new name will be Krishna Prem.” The only thing I knew about Krishna at this point in time was freaks chanting ‘Hare Krishna’ at the airport, and to be honest I immediately came crashing down to earth. It took me a while to laugh at the thought of a good Jewish boy having a name like Krishna. When I found out that the mythical blue god had 16,000 wives I turned red with envy. Osho said, “Krishna means ecstasy and Prem means love, will this be easy to pronounce?” As I nodded yes I thought to myself yes, but it could be hard to live with. Even today it’s easier when you say to me, “Hi Krishna Prem” than when I call myself by that name. Many of you know me as KP. That came about from a time when I made a reservation at a Michelin-starred restaurant and I simply couldn’t reserve a table for two under that holy name. Can you imagine coming back to America in orange pyjamas and a mala (108 wooden beads), a beard down to my toes, and with a name like Krishna Prem? Being with Osho can be very shocking. Basically Osho’s first Western sannyasin was given the name Krishna Christ, and I often wonder how Osho ever got a second sannyasin. I was once at the airport flying to India with Krishna Christ when all of a sudden over the public-address system I heard the announcement ‘Krishna Christ you’re holding up the flight and your luggage will be off-loaded if you don’t present yourself at Gate 16.’ I wonder how mad we are considering the fact that hundreds of thousands of friends from all walks of life have traded in their birth names and became fools for the truth. If you don’t believe me please call yourself Krishna Prem for twenty-four hours and watch the whole world around you go into shock.

My life up until this point was a lie, festering like a disease. I wasn’t surprised when Osho suggested I do the Dynamic meditation each morning for the next three months. For those that don’t know the Dynamic meditation it  begins with ten minutes of deep, fast, chaotic breathing, which may or may not lead to letting go through screaming. In my case primaling was the truth. I needed to throw out my entire universe of enemies as well as friends in order to be alone again.

Osho suggested that the more I could let go, the more room there would be for me. I felt a key in his words that I could work on myself instead of trying to change you or change the world.

Basically…that in my loneliness I have invited my parents, my priests, my politicians, my girlfriends, all to live with me, without ever asking them to leave, and by now I was so full of my past that there was simply no room to be in the present. And he said, “Please don’t invite me into your life until you clean up your house.” And then he cutely said, “I’m not talking about rearranging furniture in your mind.” I took this to mean to make room for love I needed to throw out my hate. I don’t think he was trying to say that everything about my past was negative, but I was very welcoming without being discriminating. It didn’t take me long to figure out that I travelled ten thousand miles away from my home town in order to get some distance from my up-bringing. By the time I did the Dynamic meditation for ninety mornings at Juhu beach in Bombay I was so alone from throwing everything out that I didn’t even know who I was. Isn’t it funny how much we define ourselves by our past relationships? This I that I’m referring to is made up 100% of ‘the not-real me,’ and that is why in meditation one comes to know that one doesn’t exist as a personality. That in fact we are all individuals who instead of coming from our own passion, come from the teachings of others. Blessed are the ignorant, including family and friends, who have shared their untruths with me. This is why meditation is called no-mind. It doesn’t mean that there isn’t a mind, it simply means that we come into this moment naked and alive and creative…not a part of our up-bringing. Of course the problem was that I threw out the baby with the bathwater, so just like one had problems holding on, sometimes you let go too much. Life is in the balance. By the way, I didn’t do the entire ninety mornings of Dynamic at Juhu beach, I was travelling and ended up dizzy and short of breath in the Himalayas. Deep, fast, chaotic breathing is not the best thing to do at high altitude with Mount Everest as a backdrop; it’s similar to getting the bends coming up from a dive in the Maldives. As above so below. I continued to do the Dynamic mediation for the better part of the next nine years. I giggle to myself even today as I recall when I once did it at Venice Beach by the Pacific Ocean while I was still blindfolded; I simply floated on the salt water during the silent stage, and luckily didn’t drown when the tide came in. I was also once detained temporarily by the Los Angeles Police Department when I did Dynamic in Griffith Park at sunrise. I thoroughly recommend, for your personal safety, that you come to the OSHO International Meditation Resort in Pune, India, to do the Dynamic meditation for a minimum of twenty-one days. It’s not only a safe environment for change and personal growth, but you can avoid incarceration. Remember, meditation can get you in trouble.

“There are only three steps. The first step: becoming aware that this world is nothing but games, becoming aware that this world is nothing but our projections; and the second step, becoming aware that the other world, heaven, paradise, is also nothing but our unfulfilled dreams, our unfulfilled desires projected in time, in the future; and the third step, when this world is dropped and that world is dropped, then all that is left is you. Then all that is left is the faculty of projection, the mind, the ego. And the third step consists of dropping the ego. And suddenly you are back home. Suddenly nothing is needed any more, all is available. And then one starts laughing, because this had always been so – all had always been available. Just because we were searching and searching, and we were in such a frantic search that we never looked within; we never looked at the treasure that we are already carrying, we became too much obsessed with the outside world; we forgot the language of the inner, we forgot that there is an interior in us and that interiority is God.

Meditate over these beautiful lines of D.H. Lawrence:

The phoenix renews her youth
Only when she is burnt, burnt alive,
Burnt down to hot and flocculent ash.”