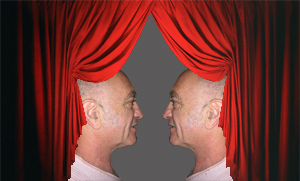 I like a good movie... I simply love escaping from the “real world”. But do not get me wrong. My life is not about becoming a movie star. As a ‘far in’ meditator, I am now interested in me watching myself watching the movie. This is deep shit. As I do not want you to miss the art of watching yourself watch the movie, I wish to quote Osho below.

Remember: Life is not a dress rehearsal!

Every sixty seconds you spend upset is a minute of happiness you'll never get back.

Today's Message of the Day is:

Life is short, Break the rules, Forgive quickly, Kiss slowly, Love truly, Laugh uncontrollably, And never regret anything that made you smile.

As far as I am concerned, awareness happens instantly when you know your shit. Come to think about it, shit is simply THE MOST FUNCTIONAL ENGLISH WORD.

HOPE THIS MAKES YOU SMILE

THE MOST FUNCTIONAL ENGLISH WORD

, shit !
Shit may just be the most functional word in the English language.

Some people know their shit, while others can't tell the difference between shit and shineola.

There are lucky shits, dumb shits, and crazy shits. There is bull shit, horse shit, and chicken shit.M:

You can throw shit, sling shit, catch shit, shoot the shit, or duck when the shit hits the fan.

You can give a shit or serve shit on a shingle.

:You can find yourself in deep shit or be happier than a pig in shit.

You can have too much shit, not enough shit, the right shit,
the wrong shit or a lot of weird shit.

You can carry shit , have a mountain of shit,
or find yourself up shit creek without a paddle.

Sometimes everything you touch turns to shit and other times
you fall in a bucket of shit and come out smelling like a rose.

When you stop to consider all the facts,
it's the basic building block of the English language.

And remember, once you know your shit, you don't need to know anything else!

Shit happens... And once you are aware of this essential truth,
a shift happens in your consciousness.

View Previous Issues of this newsletter (click on the numbers below):